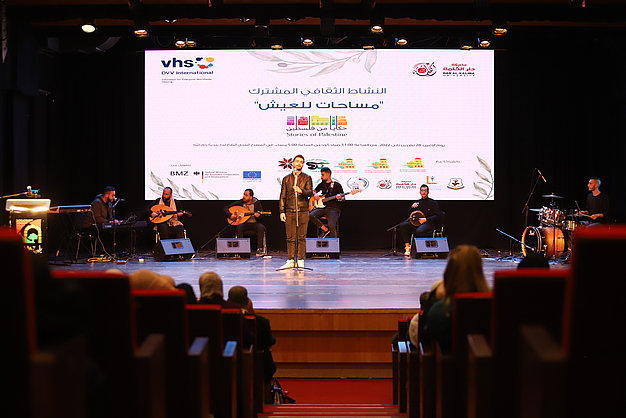 On 28 November DVV International Country office in Palestine and Dar Al-Kalima University organized a joint cultural event “Spaces for living “which comes under the “Stories of Palestine” project that is funded by the European Union and BMZ, and in cooperation with community Adult Education Centers (AECs) in Al-Yamoun, Al-Karmel, Arraba, Al-Samou’ and Al-Thuri Women’s Centre in Silwan.
Spaces for Living, is a joint cultural event aims at highlighting the Palestinian collective identity in the rural, urban, and Bedouin areas. Each of these components of the Palestinian society has its unique ways of expression that mirror its own history, heritage, environment and present life. Together, they represent the Palestinian diverse and rich identity and culture. It also gives an example of the creative and authentic living spaces that Palestinians create despite the hard conditions in which they live.
This event is one of a series of cultural events the partners of the project Stories of Palestine are conducting. This activity shed light on the Palestinian tangible cultural heritage by conducting an exhibition in Ramallah to display the traditional handicrafts and food products that are mainly taken from the Palestinian cultural heritage. Products that were showcased represent results of actual learning activities and training courses local community members participated in with AECs. They presented textiles and embroidery products such as bags and scarfs, traditional food such as local Jameed, taboon bread and different kinds of pickles, olive oil soap, Arab and western sweets and natural honey.
In addition, this event highlighted the intangible heritage aspects through a set of various musical and artistic performances, like the Palestinian Dabkeh, Dahya and Derabkeh with woman’s songs at weddings and Hennas, In addition to zajal, poetry and a musical performance by the students of DAK University.
The cultural exhibition was launched by Ms. Ola Issa, the Country Director of DVV International, Mr. Majid Khalayleh, Mayor of Assamou, and Mr. Mohammad Dababseh, Mayor of Al Karmel. The Art Performances were launched by Mr. Nazaret Nazaretyan, Regional Director of DVV International, Mr. Thomas Kirchner, Head of Governance Section at the Delegation of the European Union in Jerusalem, and Ms. Mona Ishak, Programme Manager Culture at the Delegation of the European Union in Jerusalem.
The speakers focused in their remarks on the importance of not only the Palestinian cultural heritage, but also the efforts that are made to increase awareness about it, and to share with the world its narrative. They also emphasized the need for such events that help in supporting and strengthening the local community on the personal, professional and social levels.