On Tuesday, 5 June 2018, the German Association for Adult Education signed cooperation agreements with the local partners at the Regional Office in Amman to implement the project Development and Empowerment of Host Communities for 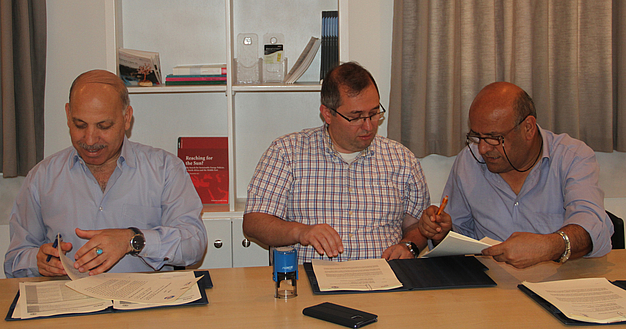 The regional director, country director, and a partner association's president during signing agreement for cooperation

This project comes within the framework of the Jordanian response plan for Syrian refugees 2018-2020, Ministry of Planning and Cooperation States within the family protection sector under the supervision of the Ministry of Labor.

The project targets 330 beneficiaries over the age of 18, 70% Jordanians and 30% Syrians. The project aims to promote the integration of Syrian refugees and host communities by improving the social protection system in the targeted governorates of Irbid, Zarqa and Mafraq.

The project raises professional awareness through the holding of a series of workshops within the four axes of the partnership. The second axe is vocational and manual training that aim to accelerate job finding. The third axe is about home economics and rationalization of consumption. Finally, the fourth axe is to support community initiatives.

Features of this stage

This project is a qualitative leap in the strategic plan to respond to the Syrian crisis. The previous stages focused on the social integration of Syrian refugees with their new world. This phase focuses on economic integration through training and raising professional awareness.

Also, work has been expanded in gender wise. The previous stages of social integration focused on women, but at the stage of economic integration, males were included among the beneficiaries of the project.